I was forced to step off a while back. By a female jogger who had made herself deliberately deaf to the traffic by using ear-buds and blind by looking at the indispensible iPhone in her hand. She ran out in front of me and I was forced to drop the bike to avoid wiping her off the face of the earth. Luckily, I wasn’t going that fast.
The resulting contact with the road wasn’t too bad but my left knee caught the tank and left it with a sizeable dent. That was two years ago. Here’s the offending blemish. 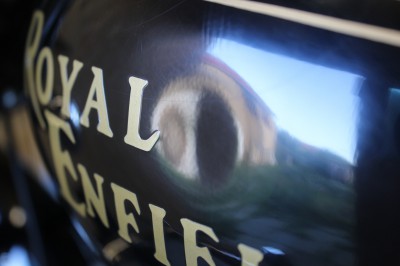 Finally annoyed enough to do something about it, I decided to consult a professional. Not easy, because the body shops are good at cars but are, for some reason, unwilling to take on bikes. I finally found a newly started business and approached them. Reluctantly, they agreed to take on the job. I met up at ten in the morning and waited for the youngster to have a look at Thumper’s dent. “I’ll try.” he said.

I explained that I had seen a hot glue puller thing on the TV. He agreed that would do the job and so he got started. “My first bike.” he explained. “I know.” I said. Reassuring him that I knew the risk involved and would hold him blame free in the event of a catastrophic failure of the paintwork, he applied the glue and the tap and got to work with the puller.

Two minutes later and the dent was gone. He then got to work with a dorn and a hammer and dressed the area around the now non-existant dent. The result was about as close to perfect as anyone could get. The dent is gone for ever. Here’s the result.. Nothing to see. 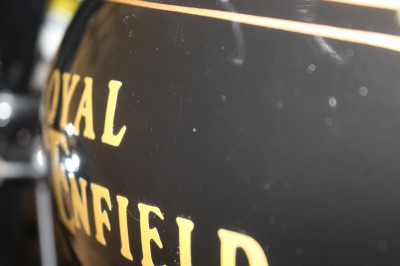 There are those who would try to do this as a DIY project. There are kits that can be bought and there is also a process of heating the area and then rapid cooling with compressed air. I’m sure some will have had some success with this. I tried the heat and cool thing mysef but it didn’t get the dent out despite my concerted efforts.

In the end, I’m glad I went to a pro. We both learned something and, for him, my money is as good as the next mans. Maybe they’ll take more bikes now.
My sincere thanks to the young man who did the job. He’s a clever lad. I hope the business does well.