I’d almost given up on the GPS. The mounting box had suffered a short circuit which I am sure contributed to my battery problems, so I stripped it all out.
The GPS unit is still working though, so I thought I might try to find a way to remount the thing and run it off a USB cable. There had to be a way.
I’ve always liked the idea of having the GPS central to the handlebars. So that became the focus of my efforts.
There are two large bolts holding the bars in place. I could perhaps use those as mounting points. I needed a plate to mount the GPS on and something to work as a mount for that unit. I still have the old mounting block for the GPS even if it is useless. I stripped it all down and removed the old mounting block from the ugly set up it once hung on.
The back of the block has four screws to secure it onto anything I decided to make. I went off to the drawing board- Here’s the result:

I had the steel plate, a pillar drill, files and a hacksaw. I had to buy 5mm screws, washers and a length of aluminium tube with an internal diameter of 5.5 mm to fashion the spacers. The measurements were tricky but I hit the target every time so very little fettling was required to assemble the whole gadget. The spacers are necessary to allow clearance for releasing the locking mechanism which holds the GPS unit in place.
Removing the bolts on the handlebar mount is not as straightforward as one would assume. The tensioning bolts under the bars have to be released to allow the large top bolts to be removed easily. After that, fitting my plate was easy.

This is how it all looks:

The mount from above: 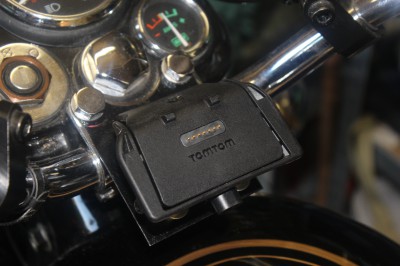 And with the GPS unit in place: 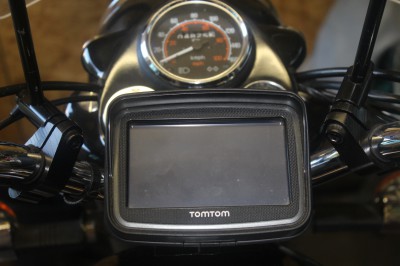 I can see over the GPS to look at the ammeter. The unit does not get in the way of the ignition and it is all pleasingly far way from the tank. I’m pleased with the result. If this doesn’t end the GPS saga, then I’ll drop the whole idea of having a GPS on Thumper..!