Out With The Old..

It isn’t easy finding 20w/50 oil in Denmark. In fact, it’s virtually non-existent for some strange reason but being a stubborn old sod when I need to be, I found a supplier in Jutland. Jutland is a bit like a foreign country for us here on Zealand but they do have Castrol in real tin cans. I ordered a gallon. 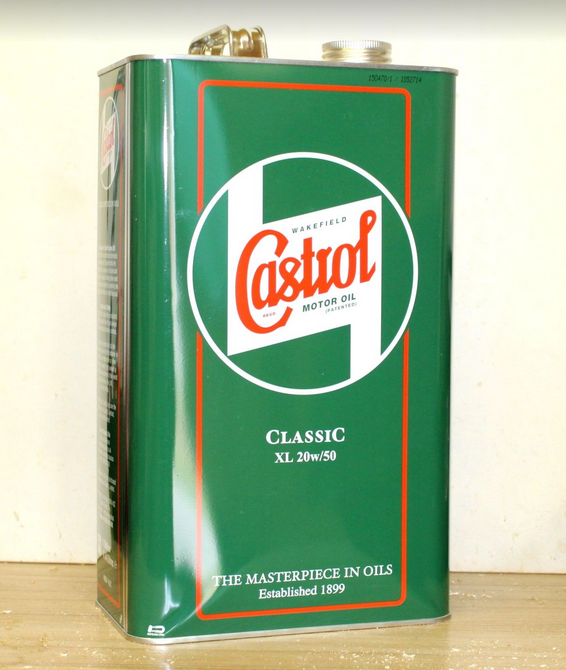 I’ve never done the complete oil change on Thumper before. OK, I drained the sump once and the tank, if you can call it a tank but this time I drained the pump and timing chest as well. A lot of very black oil came out but no swarf. Which means that all is well inside the engine. I didn’t strip out the pump though. Thumper has only done 2300 miles (3700 km) so it shouldn’t be necessary until next time, or so I am told.
Getting the old stuff out is relatively easy. Remove the three drain plugs under the engine and the quill bolt at the bottom of the timing chest. Then leave it to drain for a half hour or so..

According to the manual, the whole engine holds 2.25 litres. About 5 pints in old money. For those that may be interested, a gallon is 3.8 litres

Filling it up again was a bit more problematic. To avoid a dry start, it’s a good idea to refill the timing chest. One can pour oil in through the push rod cover but how does one pour horizontally? One doesn’t. I fashioned a syringe like affair with a half litre water bottle and a piece of neoprene tubing. Bore through the bottle top and insert the tube. Make sure it’s a tight fit. Fill the bottle and put the cap on. Insert the tube into the push rod channel and squeeze the bottle. It takes a while, but it works.. After that, simply fill the engine with the remaining 1.75 litres of oil and the job is nearly done.
Start the machine and let it run for five minutes or so, checking for leaks. Stop the thing and wait a while. Pull the dipstick and see if your level holds true. Mine did.