I got this for Christmas. I have one in the car but never thought I might have one for the bike. I didn’t think I’d ever need it. Still, not wanting to look a gift horse in the mouth I decided to fit the thing and see if it would prove itself to be useful.
The handlebar mount isn’t exactly elegant. In fact, it looks amateurish. If I was to design something to hold this expensive piece of kit, I would have put a design team on the job instead of presenting the almost bodge job that it is. Oh well, you use what you have. Here it is.. 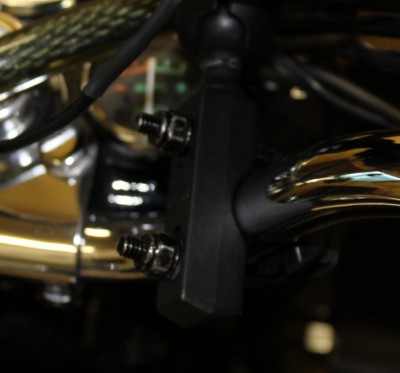 According the somewhat sparse instructions that follow the GPS, the only thing necessary, is to find a wire that goes live with the ignition on. Connect the live side to that and then find an earth for the other wire. I looked behind the headlamp at the birds nest of wires and gave up before even attempting to unravel it and identify the ignition wire. Hook it up to the battery, I thought. The damn thing can be switched off so no problem.

But then there was. A problem. 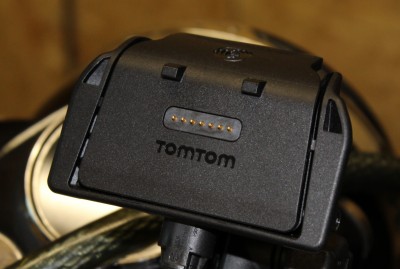 And with the screen unit fitted.. 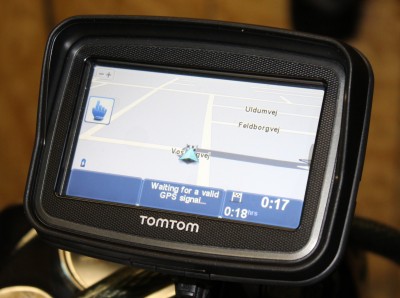 So… Plan B.
Simple, I thought, I’ll put a switch in between the base and the battery. I know that will work, but… where to put the switch?

Not wanting to clutter the headlamp nacelle more than it already is, I decided to mount a switch near the battery. I thought about using the battery box but decided there wasn’t room there, so the next idea involved making a plate to mount on the back of the battery box and place the switch there. That was simple to manufacture out of some thin steel plate and it is held in place by two pop rivets. Luckily, I have all the requisite tools and material and a little know how.

I measured the distance at which to separate positive lead and fitted spade connectors to fit the switch. The switch screws into the plate. A lick of Hammerite and the job is done. 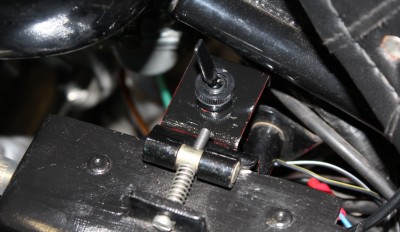 Just to be sure it worked, I started Thumper and tried to switch the GPS on. Nothing.
Flicked the switch and bingo.. all worked as it should. Switch off and the GPS powers down.

All I need to do now is plan myself a tour across the water to Sweden and take a weekend in the woods.. Bring on Summer. And, an added bonus, I can check my speedometer with the GPS.

More on that later..