Sometimes my own eagerness catches me
out…

Having decided I needed to exchange my existing tyres for something more
rounded and modern I contacted my local workshop and asked if they could order
and fit tyres for both front and back. Indeed they could but they didn’t have
anything that fitted a piece of British iron, so they had to order something
extraordinary in relation to their stock. Two weeks later, the guy rang me up
and explained that he couldn’t find a tyre for the rear wheel, did I have any
ideas? Yes I did, and duly pointed him in the right direction. Another three
days passed and they were ready for Thumper.
I delivered him early in the
morning and rang later to hear if they were finished. Yep. They were.. but.. one
of the counter salesmen had sold my front tyre in the meantime while we were
waiting for the rear, so the job is only half done…

Oh well, I collected Thumper and we are still waiting for a new tyre for the
front wheel.

I got him home and looked at the state of him. Covered in greasy
fingerprints. I decided to polish him up and get rid of the offending blotches.
Putting Thumper on the centre stand I got busy with the rag and wax and, soon,
he was looking fine again. Then I did something stupid. Taking him off the
stand, I let Thumper fall away from me, I couldn’t hold him and the brake lever
snapped like the proverbial carrot. 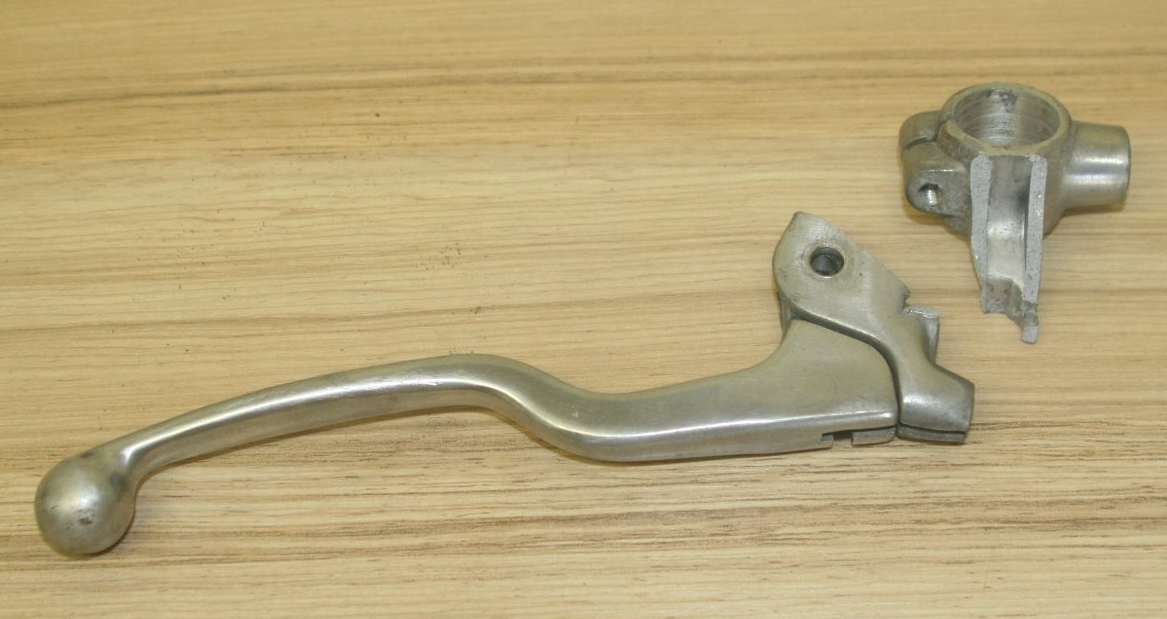 Here’s a picture of the resultant injury. I immediately ordered a new one
from Hitchcock’s and had to wait five days for the part to arrive. It arrived
today and I’ve fitted the thing already. So I can ride again.

Lessons learned: Don’t take the bike of the stand unless you are astride the
bike. Cast alloy is weak as s***. I now know how to fit a new handbrake
lever.

Whatever doesn’t kill me…!

And I still haven’t heard from the workshop about my new front tyre….