It was all going so well. Then Thumper wouldn’t tick over properly and he just didn’t sound healthy. Deciding that I needed to adjust the tickover I began playing with the air screw and throttle stop on the carburettor. No matter what I did, I couldn’t get him to run properly. Finally, I decided that the carburettor would have to come off and be looked at.
Then I found this: 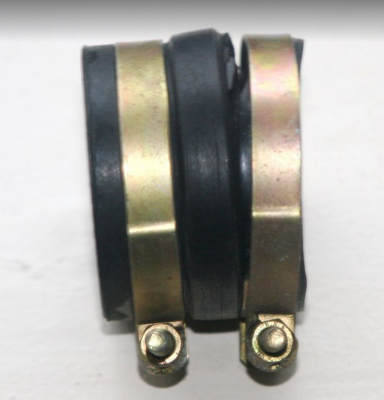 The intake manifold rubber is split open. It has been on the bike since new and, according to advice I have received, this is a common problem.
It doesn’t explain why the engine is running rich though. I would have thought it would be running lean due to the false intake of air so I may have to strip the carburettor and move the fuel needle down a tad to get my fuel right. Time will tell, but right now I have to replace the manifold hose.

Quick update:
Nice sunny day today, so.. as the carburettor was out anyway, I moved the stop on the main jet needle to a leaner setting just for the hell of it. Not a difficult job but you need a steady hand! It may solve the rich running…