I couldn’t wait any longer. The cold weather has loosened its grip on us for a day or two so it’s off to the shed and get the saddle exchange done.

Getting the indigenous double seat off is easy. Four nuts and a quick pull on the sissy bar and it came away with no problems. The problems came later.
While I had the seat off, I fitted the electrics cover which obviously protects the wiring loom sitting directly beneath the saddle. It also helps to keep the bike looking tidy, so if you’re considering a seat change yourself, go the extra couple of quid and get one. It is well worth the investment.

Now, on to the refit. The saddle comes with a fixing set. Two plates, oblong, rounded corners, four bolts complete with washers and nuts and no instructions. The springs which hold the saddle up and cushion your ass are polished externally only and, again, no fixing instructions. So you’re on your own Jack. Deal with it.
The nose end of the saddle has a mounting on the underside comprising of a metal tube on a fixed axle and a bolt welded centrally. The nut which holds this in the fixing bracket will fit into the bracket but one cannot get a spanner to it to tighten it. The bracket works like a housing which absolutely encloses the nut and when fitted, there is no access to the nut, so I tightened as much as I could with my finger tip and that will have to do.

The springs mount on the saddle retaining studs which are too short to go through the electrics cover, the spring and the fixing washers. Next job then, is to loosen the studs and screw them as far out as one dares and then mount the spring. The spring is cunningly designed so as to not allow a grown mans finger to get in between the coils and maneouvre said washers and nuts. Frustratingly so. This is valid for both ends of the springs, which leads to some fairly colourful language when you get to fit the fixing plates underneath the saddle. Gravity is always against you in these situations.

I finally got it all in place but not without tea, cigarettes and a good deal of cursing. I’m pleased with the result but I believe there must be an easier way to fit these things. Maybe I should get my inventor hat out and see what I can do. 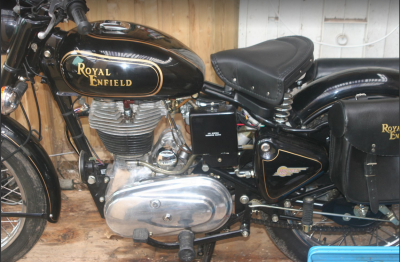 After I’d posted this, one of my online friends pointed out that I may just have gotten things a little wrong. As my father would have said in his day, it’s all ass over tit.
The fixing plates should mount on the seat studs, the springs should be mounted directly under the saddle and the fixing plates adjusted radially to accommodate a more upright stance for the springs under the saddle.
I did as Pete suggested and it all makes much more sense now! So he gets a mention in dispatches here and if ever I run into him, he’s good for a pint or two. Here’s what it should look like: 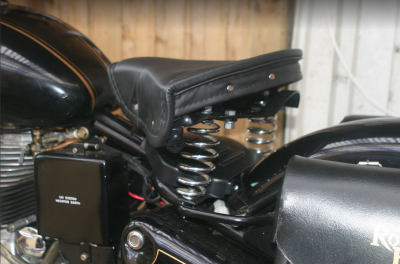 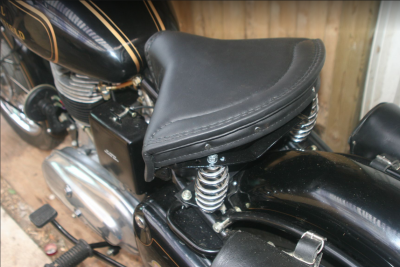