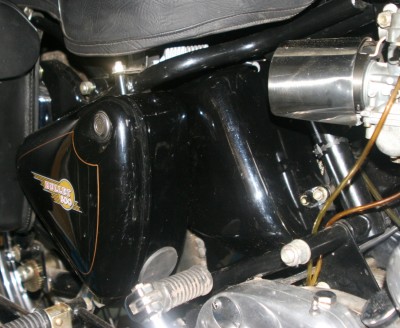 The madness continues after the air filter rebuild. Having removed the old air filter box the resulting void left my electrics rather exposed and left the bike looking untidy. I’d had a bit of a winge about this on the Hitchcock forum and some bright spark told me that there was a cowling that could be fitted to cover the coil and exposed leads and tidy up the appearance of the area behind the carburettor and air filter.

I thought, ‘Gotta have it.’, so the hunt was on again for parts for Thumper.

I soon found it and, while I was at it, I ordered a single saddle and a top cover for the electrics which will, eventually, sit under the saddle when I re-fit. At the moment, the weather is so cold and that includes the inside of the shed where Thumper lives, that I may not get around to changing the saddle just yet.

But I digress. Having received all the bits in the post, I decided that this simple little job of attaching the cowling would be easy. It was, but one has to remove the toolbox to get at the fixtures, so the job took a bit longer than I thought it would. That is not difficult, but with freezing fingers, it took its time. It isn’t the removal that’s tricky, it’s putting it back where it came from that gets you!

The cowling sits on the old filter box mountings and one of the toolbox supports doubles up as the top fastener. Fitting was relatively simple and the whole job was done in well under one hour. The end result is impressive and elegant. Gone is the gaping hole where the old filter was and the coil and leads are neatly tucked away from the vulgar gaze. Aesthetically pleasing.

Had I known about this cowling before I changed the air filter, I would have ordered the whole kit at a single stroke and saved a bit on postage costs. Chalk one up to experience.

I hope you’re all taking notes…

One Reply to “The Cover Up”