Air on a G-string

Or something very close.

I’d been toying with the idea of actually using the right hand tool box as a tool box instead of an air fiter housing. Two options are available. One is to rebuild the tea caddy-like filter box and the other is to fit a conical air filter directly to the carburettor. I opted for the latter.

I found an S&B conical filter that comes with an optional shroud which offers some protection from the rain and other evils. Having checked that it will fit the carb, I ordered the two parts and set about rebuilding the machine. 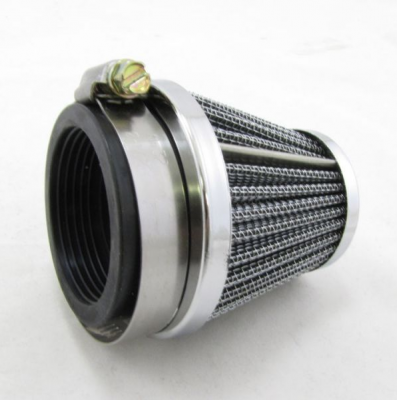 Actually, it wasn’t that simple.

If one changes the air intake from the restrictive system it was to the open free draw that it now is, one also has to re-jet the carburettor. If it draws more air, then it needs more fuel, otherwise it will run lean and destroy the piston.

So I had to re-jet. I rang my suppliers of all things good and we agreed on a jetting that would solve this issue and parts were duly dispatched.
This meant I had to pore over technical notes as I’ve never stripped a carburettor before but after reading it all through a couple of times, I felt reasonably confident about tackling the job.
In fact, that bit of it all was easy. I removed the carburettor from the bike, re-jetted the carburettor, found and fixed a fault with the choke locking mechanism and fitted the filter and shroud, all in about thirty minutes. Not bad for a newbie, I thought. Proud of my achievements, I refitted the carburettor and attempted to start Thumper.

So, fuel on, ignition on, engine set to run, choke and kick. Three kicks and he was running. Yay! Success.
The subsequent road test went well too.

Only one problem niggled at me now. The carburettor is only supported by the rubber connector between it and the cylinder. It sort of dangles in the air and bobs about a bit. Actually, I could hear the carb knocking against something under the tank as it moved about. I decided I needed to support the filter side of the carb.

There is no part to be found that will do this. So I had to fabricate a bracket and figure out how to mount it. The tank retaining bolt is slightly behind the carb and the filter shroud is mounted to the filter by the large jubilee clip which holds it in place. This fortunate coincidence provided my two points of contact.

I bought some aluminium strip and set to work with a bench vice and a pillar drill and finally made the resulting bracket. Here’s a picture of it, in situ. 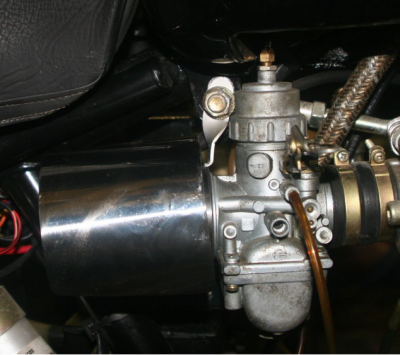 The whole thing sits very solidly in place now and the carb no longer jumps about. Cost? Pennies.

The right hand tool box is now fulfilling the purpose I wanted it to. The holes that fed the air ducting have been blanked off and I can fill the box up with tools, cables and other spares that may be needed on longer trips.

Sometimes, I even amaze myself!